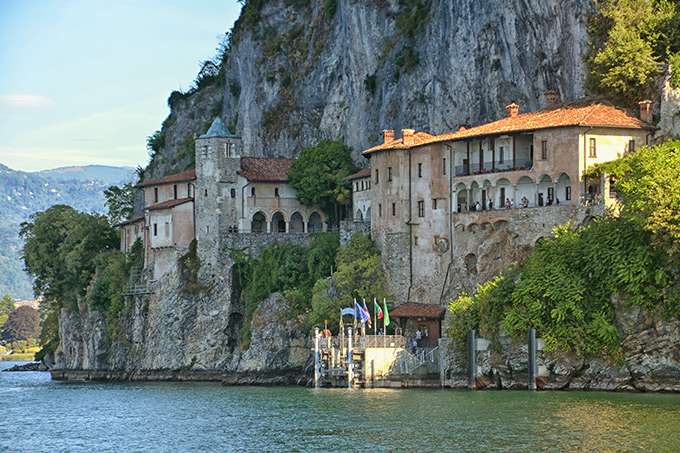 The Hermitage of Santa Caterina del Sasso, perched on its “balcony” overlooking the Borromeo Gulf, is one of the most intriguing historical sites on Lake Maggiore. You reach it from the lake by climbing a flight of 80 steps, or you can descend the 240 steps from the car park above.

Picturesquely located on a sheer cliff above the water, the Hermitage was founded in the 12th century by the merchant Alberto Besozzi of Arolo (Leggiuno), who on being shipwrecked took refuge in a cave and vowed devotion to St Catherine. In 1195 he built a tiny, isolated church in recognition of his deliverance. The present buildings date from the late 13th – early 14th centuries.

In the 13th century the Hermitage was home to a community of Augustinian monks, followed in 1379 by the Ambrosian Hermits and in 1649 by the Carmelites. Today the monastery is run by a community of Oblate Benedictines.

The Hermitage comprises three buildings datable to the late 13th-early 14th centuries: the southern convent, the small convent, and the church.

The southern convent was built in the 15th century and later altered, in 1624, by Father Giulio Martignoni, after the old wooden structure collapsed into the lake.  Access is through a round-arched portico with granite columns.

The small convent, located opposite the winepress courtyard, is built on 13th century walls and embellished by a pointed-arch portico. The refectory is on the ground floor, the monks’ cells on the first floor; above the windows of the cells there are traces of the 16th century fresco depicting the “Martyrdom of St Catherine of Alexandria”.

The inner courtyard of the complex opens onto the church, whose portico is formed of four rounded arches in Renaissance style. The bell tower with its sheer drop to the lake was built in the 14th century; it has an open belfry with double lancet windows, made of Angera stone.