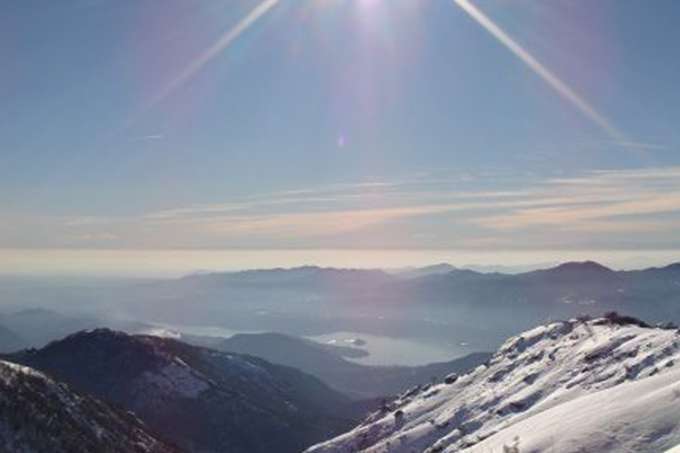 The mountain of Mottarone (1491 m), which with its gentle, grassy slopes divides Lake Maggiore from Lake Orta, offers one of the most breathtaking views of the lakes and the distant Alps.

The sight is unique: an uninterrupted 360° panorama from the Ligurian Apennines and the Maritime Alps to the Monte Rosa massif, the Monviso and the high peaks of Switzerland, across the Po Plain, and the unequalled spectacle of seven lakes (Orta, Maggiore, Mergozzo, Biandronno, Varese, Monate, Comabbio).

In 1911 the summit was connected to the centre of Stresa via a historic rack railway, which was later replaced by the present cableway, which starts from Carciano near Stresa.

Mottarone offers hiking enthusiasts a myriad of paths of historical and scenic interest, through mature woods of fir, pine, larch, beech and chestnut, across ancient mountain pastures where animals graze and the meadows are full of the scent of herbs and flowers. The mountain is also of geological interest, with several quarries, mostly of white and pink granite.
In winter it is a major ski centre for the Lake Maggiore area, with a variety of runs, excellent restaurant facilities and equipment hire.

HOW TO GET THERE
You can reach the top of Mottarone by the “Due Riviere” road from Armeno, or the private “Borromea” road (toll) from Stresa-Gignese. There is also a cableway service leaving from the Lido of Carciano near Stresa practically to the summit (intermediate stop at Alpino).